A swarm in May is worth a load of hay,

A swarm in June is worth a silver spoon,

A swarm in July ain’t worth a fly.

Simply put, a swarm is a beehive’s way of reproducing.  In the Spring, if the queen of a hive is strong and the population of bees plentiful, the queen will leave the hive with nearly two-thirds of the hive’s bees to find a new home, leaving the original hive to rear a new queen and continue on.  A honeybee swarm is an amazing sight to witness.  A strong hive may have 60,000 bees, so when the queen leaves with her followers, she’s in the air with nearly 45,000 bees.   An awesome vision, the bees fill the air like snowflakes in a blizzard. 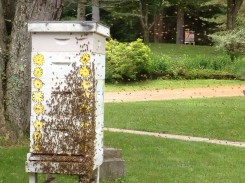 So it was this that Michael noticed through our solarium window.  We have three beehives at our Vermont Bed and Breakfast and one of them is just outside our breakfast room.  This is the hive that had released its bees into the yard, completely consuming the front lawn – bees in the grass, bees climbing the hive boxes, bees in the air.   We watched for several minutes, waiting to see where the bees would land – because that’s what the poem up above is all about.  Ideally, the honeybee swarm will land in a place that we can catch them and relocate them to an empty hive box.  If it’s early enough in the season, say May or June, the bees will have plenty of time to draw out their honeycomb and fill it with enough honey to survive the inevitable winter season.  The earlier, the better, because a May swarm will not only make enough for its own stores, but honey for the beekeeper too!  But if it’s late in the season, the bees prospects for survival are just not as strong, so they’re not as valuable to a beekeeper.

Our own honeybee swarm was in the first couple days of July so I was feeling pretty optimistic about the bees being able to pull it together and make a go of it.  With this eagerness, we waited for the bees to settle.  A honeybee’s swarm schedule is pretty predictable.  The bees leave the hive in a flurry, then they settle on a nearby branch dispatching several bees to scout the area for a suitable new home.  This can take a few hours or a few days.  The swarm waits patiently in a cluster – well, a “cluster” is sort of an understatement.  The mass of bees crawling over one another and hanging off of one another is the size of a basketball with thousands of bees sprawling along the branch for several inches in every direction.  One of the coolest parts of seeing bees in this state is that the bees are super passive and very unlikely to notice a human’s presence, so we’re able to stand freely and watch the magic.

Unfortunately for us, these bees settled on a branch three stories high.   There was no prudent way to catch them, so we were forced to accept this a donation to nature.  The bees would find a new home, move into it and continue the tradition of bee-ness elsewhere. 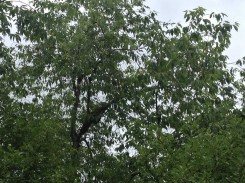 (In the photo — which was taken from 30 feet below –you can see the brown clump.   That’s the mass of 40,000 bees or so.  They say a picture is worth a thousand words, but sometimes a picture just doesn’t do justice.)

The bees remained on their branch for two overnights, through the torrential downpours that have so marked this Spring. And then on a sunny afternoon, after returning from errands, we found the branch bare.  The queen and her acolytes found a new space while the hive they left behind awaited the birth of their new queen.  Within days, their new queen would emerge and this ‘daughter hive’ would be complete once again.

Our Bed and Breakfast is located in the Okemo Valley of Vermont.  We have two sheep, nearly two dozen chickens (fresh eggs!), and three beehives.  Ask about getting a tour of a beehive.  You can don a beekeepers suit and veil — or watch through the windows from the comfort of our solarium.