The honey bees at the Golden Stage Inn are waiting out the winter to make another delicious batch of local Vermont honey this summer, but always on a backyard beekeeper’s mind is the threat of what is known as “Colony Collapse Disorder.” While the cause of Colony Collapse Disorder remains a mystery and may be more complicated than one simple answer, a parasitic fly may have something to do with it. Before October 2013, this parasite had not been observed any further East than South Dakota…but a recent spotting will cause concern for Vermont beekeepers this summer. The phenomenon of ‘Zombie Bees’ (or even ‘ZomBees‘) has reached Vermont and now threatens the East Coast. See where Zombie Honey Bees have been spotted across the United States using this map, and visit www.zombiewatch.org to help monitor the spread of the ZomBee syndrome through citizen science. 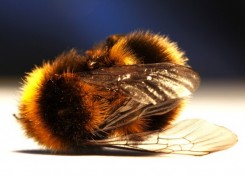 The parasitic fly causing the zombie-like infection is called Apocephalus borealis, and has been known since the 1920’s as a parasite of yellow jackets and bumble bees. John Hafernik discovered that the zombie fly infected honey bees as well in 2008, just two years after colony collapse disorder began to affect honey bees and their hives. Apocephalus borealis lays its eggs in the stomach of the honeybee. The infected honey bee leaves its hive, exhibiting symptoms such as nocturnal activity, attraction to light, and disoriented, spasmodic movement. It is this convulsive movement that the term “ZomBee” came from, as the bees move very similarly to zombies in Hollywood movies. They are not actually undead; they simply appear to be. When the eggs hatch, the honey bee dies. Unfortunately, Vermont was the first state in the East Coast to record a sighting of this parasitic attack back in October 2013 in Burlington. It is unknown whether these Vermont zombie honey bees are an isolated case or a forewarning of more Apocephalus borealis infestations to come.

Colony collapse disorder is a serious threat to both backyard beekeepers and large-scale, commercial beekeepers. Since 1/3 of the fruits and vegetables we eat depend upon bees to be pollinated, this disorder doesn’t just affect the insects – it affects our cuisine and nutrition as people!  Vermont zombie honey bees may be a new threat to beehives across Vermont or even New England, which is why it’s important to continue research and become a beekeeper! Even if you are not a beekeeper and don’t plan on keeping honeybees, you can help in other ways. Purchase local Vermont honey as your sweetener. Welcome beekeepers to your community. Know what chemicals and pesticides have been found to harm honey bees and contribute to colony collapse disorder. Plant a bee-friendly garden with native wildflowers. Learning about bees is not just environmentally-conscious…it is fascinating and fun!!