We are blessed this winter to be displaying several watercolors and oils by talented Vermont impressionist Robert Sydorowich. His landscapes depict Andover, VT, where he has resided for over 40 years, as well as surrounding towns such as Weathersfield, Windsor, Shrewsbury, Ludlow, Wallingford, Plymouth, Weston, Quechee, Waitsfield, and Salem. In his own words, his creations strive to be “simple, focused, capturing the truth of the moment.” His work is featured in galleries across the state, in New York City, and even in London, as well as his own gallery in Andover. While his gallery, a converted 1000-square-foot barn, is in hibernation for the snowy months to come, a few of his paintings have found a temporary home in the Golden Stage’s living room and dining room, and the Inn’s walls are practically shivering with delight to be so beautifully adorned! 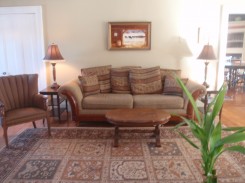 These gorgeous landscapes that our guests can now enjoy from the comfort of the indoors are reminiscent of the scenic country roads wandering to and from the Inn. Cows graze peacefully, ice-covered creeks wind between evergreen trees, snow-covered hills shelter silos and barns, and shadowy mountains undulate before lavender winter skies. Even the rusty, smoky colors of Stick Season become idyllic when interpreted by Robert Sydorowich’s paintbrush. [Stick Season, for those who may be hearing the term for the first time, is that period after the fall colors but before the winter snow, when deciduous trees are bare to the bones. Though this may sound bleak at first glance, many rejoice in November’s comforts: cider-pressing, root-crop and winter squash harvests, wool sweaters, pre-Christmas shopping, and the first wood-stove fires of the year!]

At this Bed & Breakfast, we do our best to support and advocate the abundance of local artistic talent available year-round. Robert Sydorowich will especially appeal to those of you who take an interest in art that reflects the natural world while giving you a full sense of what it means to call Vermont home. You can see two of the pieces featured at the Golden Stage Inn at Robert Sydorowich’s website, entitled Winter Reflections and Nancy Brook. The remaining paintings housed here cannot be viewed online, but there are several images on his website that depict scenes you’d be certain to see during a winter stay in the Okemo Valley region! These include maple syrup taps; a covered bridge; views of Okemo; and – most importantly – a cozy stove warming a sleepy cat and a pot of tea. 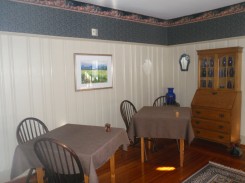 If you live in the area, we encourage you to seek out Robert Sydorowich’s fantastic impressionism in person, whether at a gallery near you or at our own first-floor-turned-art-gallery. This past fall, Sydorowich was featured in the Vermont Open Studio Weekend in conjunction with 130 other artisans and craftspeople. Hopefully he will be a part of the Spring 2014 Open Studio Tour as well, since it will be the Vermont Craft Council’s 20th year putting on this incredible promotion for VT crafts and art!